Getting studio sound at home

If you ask them, audiophiles will agree that the room is the biggest obstacle, the biggest problem. But very few have taken a scientific view on what would be the best possible room – says Christensen to hi-fi news article on getting studio sound at home.

From the ground up

Only a very fortunate few can take the ultimate step of building a dedicated listening room from the ground up with the help of an acoustic expert. But perhaps that’s what we’d all really like to do. So earlier this year I was delighted to take up an invitation from Michael [see Sweetspot, HFN Mar ‘o4] to see and hear this newly-completed domestic hi-fi and AV room, which was designed by Danish engineer Ole Lund Christensen.

Christensen says, ‘if you ask them, audiophiles will agree that the room is the biggest obstacle, the biggest problem. But very few have taken a scientific ciew on what would be the best possible room.’

Back in 1985, then a partner in a pro-audio import company, Christensen designed the new Puk recording studio, which soon attracted clients as illustrious as George Michael and Elton John. Later, having developed big active soeakers for studio use, Christensen launched the GamuT D200 amplifier, initially under the name Sirius. He sold GamuT in 2003, and since then he has designed custom-build listening rooms, amplifiers and loudspeakers for clients in the USA, UK and India.

Here in the UK, Michael had bought a beautiful Georgian house. He asked Ole to create a listening space that would incluse a new home cinema system but also provide the best possible results from his existing high-end stereo system. This was a dCS Verdi/Elgar/Purcell fron end, Halcro DM8 preamp and DM68 monoblock amps with Audio Physic Medea speakers.

Michael was bringing this system unchanged from his previous home. There he’d felt happy with the equipment, but he’d recognised the effect of the rooms it had been used in. So it was time for a clean slate. Christensen’s design started with a floating shell inside the walls of the buildingm so the room is almost perfectly soundproofed. Inside the shell are very thick absorbent layers of rockwool, which are finally covered with fabric. 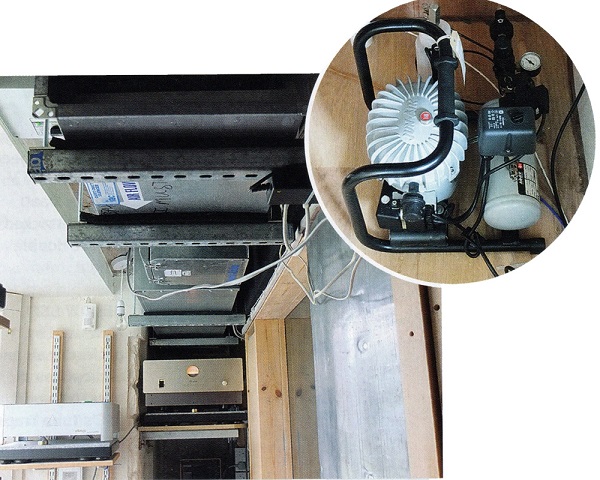 ‘I found that the first problem that you need to solve is getting silence,’ he says. ‘Because if you don’t have the silence, all the small details will not be audible. So that’s the fundamental Rule Number One. If you can’t hear it, it’s gone’.

Lengthy special ducting makes the air conditioning system virtually silent within the room. The door seals automatically when closed, thanks to a neat over-center catch. 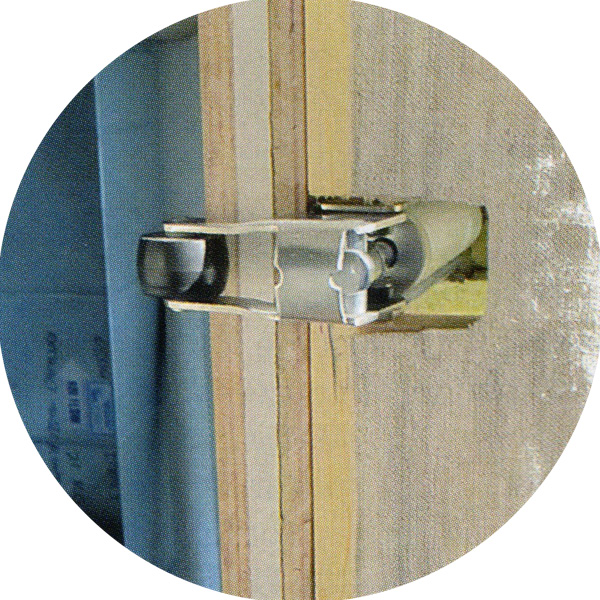 Christensen’s next concern was, as he puts it, ‘To make sure that the speakers interface with the room as best I can. So that the music energy is transferred to the listener with as little interference as possible’.

He jokingly calls his absoerbent wall system a ‘black hole’ wall, because it absorbs all but the lowest frequencies. But what doesn’t mea that the room is totally dead.

‘The job of the acoustics is to make it easier for the brain to decode all the signals. What this acoustic does is to remove the clutter of the room, so you are listening to the loudspeaker, undisturbed as far as possible.

‘You actually have to split the sound into three parts, as is well known. First you have the direct sound form the speaker to your ear.

‘Then you have the first reflections, which are from the speaker, down to the floor and up to your ear, and to the side walls and then to your ear.

‘And then, thirdly, a bit of time later, all these sounds have bounced around enough to become diffuse. Diffuse means that you cannot say that there is a pattern, the sound has to come from everywhere randomly. In a normal room, an average room, actually more than half of the energy that hits your ear is coming from the surfaces, not from the loudspeaker.

‘That means that your brain is trying to dig out the direct sound , but it is constantly overwhelmed by most of the sound energy, which is coming from the surfaces, from the early reflected sound, and from the diffused sound which is from multiple reflections. ‘So I must reduce the first reflections, because they are the enemies! Well, I have to have a floor to stand on, so I have to have a first reflection from the floor. Now, humans live on the earth. We always have a surface below us, so our brain has solved that problem many years ago. But the height and the side reflections, they are the variables in the room. In a big concert hall, a big space, there is the simple fact that it takes a long time for the sound to travel to the wall and come back.’

So the reflections in the concert hall, because the distances are so big, are very weak, and diffuse. ‘What I’m doing is trying to give you an amount of diffused sound as late as possible. Because if you think about it, you have the direct signal coming to you. Now, that’s one note, but how the musician is playing the next note, and now a third note. Now, any sound from the room will disturb these notes. On the other hand, I have to have some of it.

So the decision is to leave a time window as long as I can manage, so that the first note has the room to itself, until a sufficient time has elapsed so that the note can decay, and you hear the decay into silence. And then you have the diffused bit, to maintain the feeling of being in a space.’

Starting with similar principles to an LEDE (Live End/Dead End) control room, Christensen also aimed to make a small listening space feel like a much bigger space. None of the surfaces in the room are parallel. ‘There is no time delay, no side reflection. There is only the direct sound and then the reflections of that, and these I take care of with my absorbers, and only having select, limited reflecting surfaces places so that the sound cannot go direct to the listener, it has to bounce many times, getting delayed and low in level and diffuse.’ 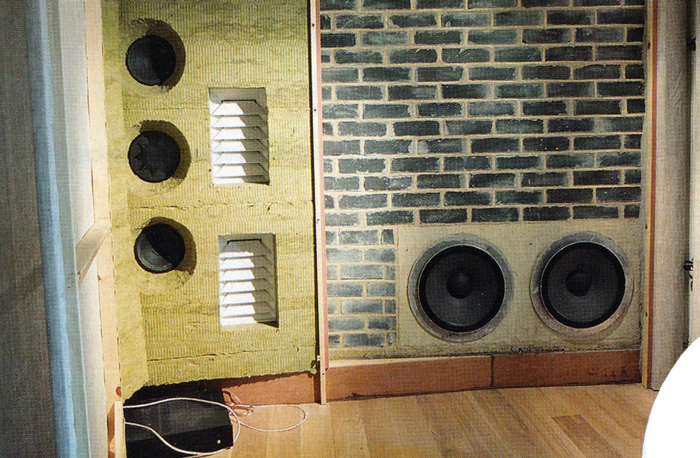 In Michael’s listening room, massively constructed subwooder enclosures are positioned at crucial angles. There are no parallel surfaces.

Sitting comfortably in Michael’s room, the listening experience is as immersive as you could wish. We became totally absorbed in the music, whether from CD or from Blu-ray using the multichannel system, and it really was like listening in a much, much larger space than the actual room. We felt ourselves transported to La Scala by the fabulous Blu-ray recording of Verdi’s Requiem under Barenboim. 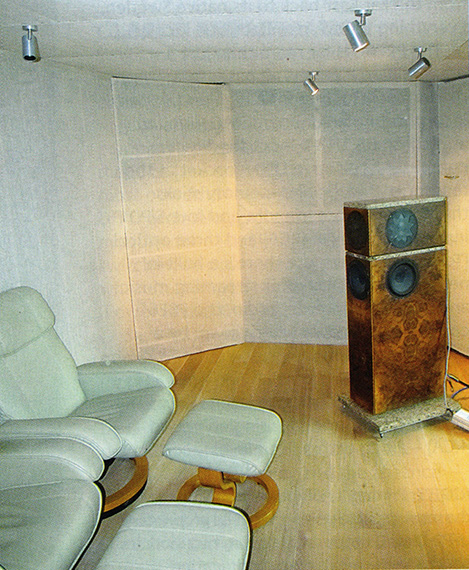 One of the Medea speakers in the room, which is 6m wide by 4m front to back

To listen here was to become oblivious to the surroundings, which are really quite utilitarian, with just plain fabric on all sides to cover the foot or more thickness of rockwool behind it. But on those walls behind the listening seats, surprisingly perhaps, there are a number of thin wood battens.

‘Yes. A little bit of wood framing’, says Christensen. ‘I found that if I didn’t have the wood frames, it didn’t sound good enough. When you work it out from the dimensions, they are so small that only the very highest frequencies, above 10kHz, will interact with them.

‘What this does, I think – and this is my personal theory – is like the way that the good concern halls, the old ones have a lot of wood carvings, mouldings, details like that. And from a physics-book point of view, these create a wonderful diffuseness of the very top end, which you don’t have in a modern concert hall. Because all the elements are big. There are no small curves.’

‘And that’s the reason why we have not been able, with all our modern technology, to reproduce the sound of these ancient halls. So rather than having a complete absorbing surface, I have this tiny spider’s-web of extreme frequency reflection taking place.’ Perhaps, I thought, a bit of that happens with the seemingly left-field Shakti Hallograph…